The Republic of Vanuatu is an island nation located in the Western Pacific Ocean. The country is an archipelago of over 80 islands stretching 1,300 kilometres from North to South. Vanuatu’s terrain is mostly mountainous, with narrow coastal plains where larger islands are characterised by rugged volcanic peaks and tropical rainforests. Vanuatu is located in a seismically and volcanically active region and has high exposure to geologic hazards, including volcanic eruptions, earthquakes, tsunamis and landslides.

Vanuatu is one of the countries most vulnerable to climate change among the other Pacific island nations. The effects of climate change on agriculture production, fisheries, human health, tourism and well-being will have the consequences of decreasing national income while increasing key social and infrastructure costs. Climate change may affect all areas of life for Ni-Vanuatu people and impact women, men and young people in different ways. Vanuatu has positioned itself as a regional leader in the fields of Climate Change (CC) and Disaster Risk Reduction (DRR) and has been widely applauded for its initiative to establish a National Advisory Board for Climate Change and Disaster Risk Reduction (NAB) as a means of improving coordination and governance around the two issues. Vanuatu’s implementation of the UNFCCC has progressed exponentially in recent years as government sector agencies become more organized and civil society, academic, the private sector, development partners and regional agencies have stepped up their activities in Vanuatu.

The proposed interventions would need substantial external funding of around US$180 million to proceed at the time frame needed. In addition, substantial technology transfer would be required including institutional support and training.

This target would replace nearly all fossil fuel requirements for electricity generation in the country and be consistent with the National Energy Road Map (NERM) target of 65% renewable energy by 2020. This contribution would reduce emissions in the energy sector by 72Gg by 2030.

The achievement of the emission reduction target specified above will be through both unconditional and conditional means based on available and additional external financing being made available to Vanuatu.

Vanuatu has successfully submitted it's enhanced NDC in 2021 to the UNFCCC.

First of all, there are basic interventions, which are recommended to be implemented in any case:

In addition to these basic interventions, 2 options are suggested for achieving the NDC target.

Option 1 includes the installation of 7.6 MW solar PV and 5.1 MW wind, which together can contribute around 30% to the target. The majority of the contribution towards the target (57%) will come from the use of coconut oil. Total costs of Option 1 are USD 73.3 m (excluding costs for the Sarakata hydro power project as they haven’t been determined yet). It is assumed that a pricing arrangement for coconut oil can be found, which is not leading to ongoing operation costs, the costs for carrying out the Coconut for Fuel Strategy are included.

Option 2 includes the installation of 7.6 MW solar PV, which is seen as the renewable energy source with lowest generation costs. The main contribution in Option 2 will come from geothermal (36%), which requires successful drilling and considerable investment for the implementation. The availability of geothermal allows reducing the input of wind energy and it suggested that only half of the additional capacity (2.6 MW) is installed. The remaining gap will be covered by coconut oil and a total of around 6 million litres will be required to achieve the target. Total costs of Option 2 are USD 66.5 m.

The Climate Action Enhancement Package (CAEP), funded by German Federal Ministry for the Environment, Nature Conservation, and Nuclear Safety (BMU) will assist Vanuatu in (i) Enhancing Vanuatu’s NDC, including by raising ambition, as part of the Paris Agreement’s NDC update process and (ii) fast track implementation of NDC’s, including by providing in-country technical expertise and capacity building.

Still under the CAEP Support, Vanuatu intends to update its NDC and enhance the integrated MRV Tool to cover other potential mitigation sectors to increase ambition and action by carrying out a detailed assessment of land transport, waste, forestry, agriculture and other potential high impact sectors that can contribute to low carbon development.

CAEP support will also assist in scaling-up the Lelepa rural electrification initiative including the use of a new Power Blox technology (swarm technology).

The Regional Pacific NDC Hub has so far also assisted with organising virtual trainings on the use of digital tools, and NDC preparation – applying the Katowice guidance on ICTU and adaptation.

CAEP: Identify the challenges of implementing the NDC activities, including gender and update NDC 2021 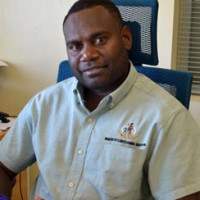 Vanuatu contributes less in-terms of its GHG emissions; but adversely impacted by Climate Change. Rather, we are taking actions through ambitious targets reflected on our NDC’s to achieve close to 100% Renewable Energy by 2030. Also we are urging the global community to work together to reduce the Climate change causes and impacts for small island states like Vanuatu.

The INDC for Vanuatu was submitted to the United Nations Framework Convention on Climate Change (UNFCCC) Secretariat in 2015.

The Enhanced Nationally Determined Contribution for Vanuatu is expected to be submitted to the United Nations Framework Convention on Climate Change (UNFCCC) Secretariat at the end of 2020.

Guide to Green Entrepreneurship in Vanuatu

The Ministry of Climate Change in Vanuatu held a two-day workshop from 22 to 23 October this week to gather inputs from stakeholders towards the development of the national quantifiable adaptation targets and indicators for its water and agriculture sectors.